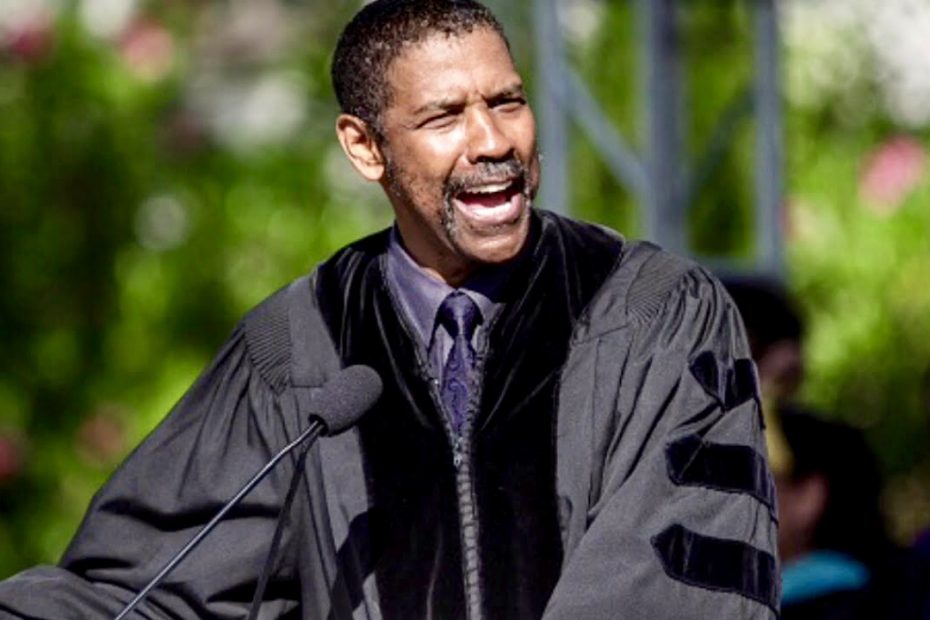 A friend of mine sent me to a video in which Denzel Washington was giving a commencement speech at Dillard University (2017). The key part to the speech was when he told the gathered students, faculty, and parents how important it is that we “Put God first.”

It’s a very good speech, and you should see it. I’m not linking to it here because I don’t want to take you off point right now. It’s easy enough to find later.

Now, number one, Denzel Washington is one of my very favorite actors, and has been for decades. He originally sold me with a powerful performance in the highly underrated Civil War movie, Glory, starring Matthew Broderick. Yes, Ferris Bueller’s Day Off Matthew Broderick! A movie I also loved, BTW 🙂

Watch both when you get a chance.

The reason I like Denzel Washington so much, is because he puts a certain integrity and “won’t back downism” into just about every role. See Man on Fire or The Equalizer movies for an example of that (I didn’t see the first Equalizer, full disclosure, and second disclosure, these movies are not for the faint of heart!)

Now, I must say that I admire Denzel for saying to “put God first” in his Dillard Commencement speech. In this increasingly God-less culture, I have a great deal of respect for him honoring God unapologetically. I’ve always sensed a religious grounding in him, which hearkens back to The Book of Eli specifically, but all of his roles demonstrate that grounding.

But it occurred to me this morning in prayer, that there is no need to “put God first.” I know that sounds bad, but hear me out. When I am in prayer, I experience an in-filling of energy I spoke of in my most recent post, God’s Power is Transmitted Through a Single Finger.

It is a beautiful experience, and one I readily seek out. There is no need for me to “Put God First,” as the desire to seek this experience is greater than any other desire!

When I have heard preachers and others exhort people to “Put God first,” of course it always sounded good, but something in the back of my mind sensed it was actually mechanical, requiring effort on our part, with the accompanying vague feeling of, “I really don’t want to do this!”

This morning’s revelation shed light on this notion.

I also prayed for a fairly short time this morning, which ordinarily I would feel guilty about. But when the prayer was “done,” it was done!

Speaking of which, I believe this post is done too!

Now how do I reconcile what I believe I am led to express in this forum with my actual “business”? I would love to have a smooth segue to a business pitch. And I don’t!

What I will say about my business, is that what I am seeing of late has no choice but to seep into the business. I am working more and more with revelation and spontaneity, instead of holding to rigid programs. And it’s freeing!

This positively affects the way I express my health and fitness coaching.

There’s a saying, “The letter killeth.” This is true in everything, and I’ll explore the idea more, I’m sure, in a later post. To reach me to discuss this further, and to find out how this principle can help you transform your health and fitness without drudgery, contact me.

But this business of “putting God first…” My advice is not to worry about it. When you experience sitting still and allowing the spirit to infill you, you won’t have to remember to “put Him first.” You’ll WANT to!

Patrick Rooney is the Founder of OldSchoolUs.com. Its focus is natural health and independent living. Patrick is the author of GREEK PHYSIQUE: The Simple, Satisfying Way to Sculpt Your Body—Even if You’re Old, Weak, or Broken Down; and is also the creator of Greek Yoga™ and the Greek Yoga for Beginners video. He offers health and fitness coaching in-person in Middle Tennessee and worldwide via phone, Zoom, and Skype. To reach Patrick, email him at [email protected].