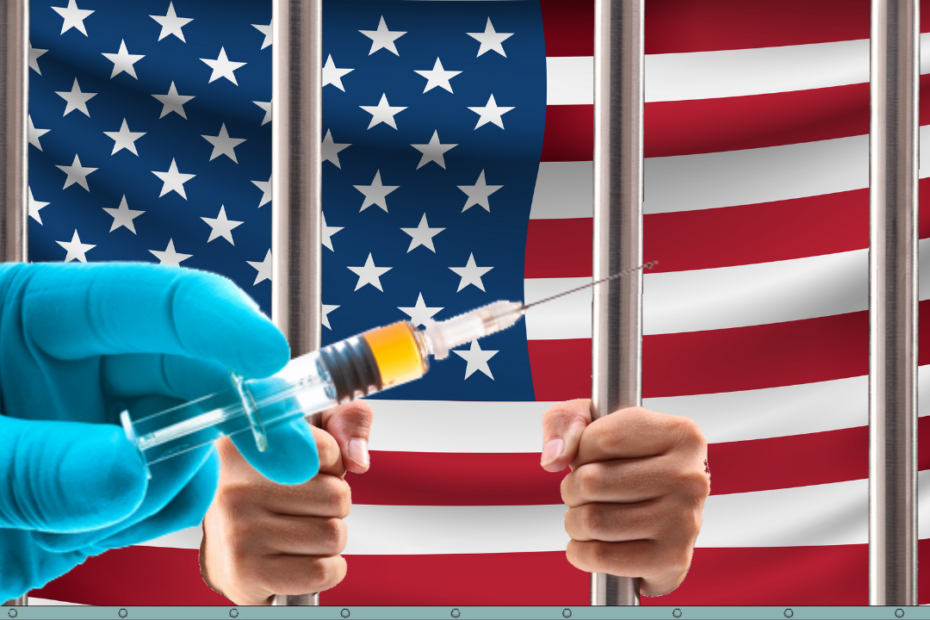 ***Natural health, success, and freedom are under attack as never before. Old School is fighting for YOU! Please DONATE to support our critical work. Thank you!***

Everybody but the actual taxpaying citizens are happy. 🙁

The administration knew that it could not effectively FORCE Americans to get vaccinated for COVID without FULL FDA approval. As of today, they now have that–at least for Pfizer, and at least for those 16 years old and up.

Few of our elected officials appear to be standing against this obscenity. One exception is Senator Ron Johnson of Wisconsin, who has been been at the forefront of the fight to publicize COVID-related vaccine deaths and injuries, including a press conference he led which featured heart-wrenching testimony from Americans who suffered major injury at the hands of the experimental vaccines.

God bless Senator Johnson, and these women who stepped forward to share their stories. Yet so far–because of fear and ignorance–it seems they are just “a voice crying in the wilderness.”

Preparing for their big announcement today, the FDA felt the necessity to trash a drug they themselves APPROVED in 1996–ivermectin! It has been called, “one of the safest, low-cost, and widely available drugs in the history of medicine.” Here’s another article speaking to its effectiveness.

See the Tweet, as well as the FDA’s article, “Why You Should Not Use Ivermectin to Treat or Stop COVID-19,” HERE.

“Internal data from the Centers for Disease Control and Prevention reviewed by ABC News, estimates a 19-fold increase of the anti-parasite medicine being distributed during the first week of August.

That distribution is despite multiple warnings from public health departments given the lack of evidence ivermectin works to treat COVID and the substantial risk of seizures or coma if used incorrectly. Ivermectin is not authorized by the Food and Drug Administration for the treatment of COVID-19, unlike available medications such as remdesivir, steroids and monoclonal antibodies, because there is not enough evidence the medication works to alleviate the symptoms of COVID-19...”

Why is ivermectin being used so much? Because many people do not trust the vaccines, and because they have heard about the effectiveness of ivermectin.

“There was a five-fold increase in cases of illness related to ivermectin toxicity over the month of July, according to the internal CDC documents. The Mississippi poison control center also issued a warning about increased reports of ivermectin misuse this past Friday. The poison control center said two thirds of recent calls were related to ingestion of livestock formula of ivermectin...”

I can believe this last paragraph, that there was a five-fold increase in cases related to ivermectin toxicity last month, given that the drug’s use is skyrocketing–as noted in the paragraph that mentions its nineteen-fold increase in the first week of this month.

But look at the kicker statement–“The poison control center said two thirds of recent calls were related to ingestion of livestock formula of ivermectin.” In other words, an exploding number of people are using the livestock formula such as an ivermectin paste which is labeled, “For Oral Use in Horses Only.” And this paste (consisting of typically 1.87% ivermectin) is sold in a tube with another warning: “Contents will treat up to 1,250 lb body weight.”

That’s roughly TEN times the weight of the average woman!

So one of the reasons the FDA is telling you how dangerous ivermectin is, is because, for instance, the ivermectin paste you’d use to feed your sick horse is typically sold in a large tube that is meant for one (horse-sized) dose!

So likely, many people are not reading the instructions carefully, and are taking in horse-size doses!

The paste comes in a large syringe that is marked in small increments, such as 50 pounds, so correctly measuring should not be a problem. But there are always some people who don’t follow directions well.

But let’s take another step back: Why are some people at such a desperate enough point that they feel the need to take a form of ivermectin that is labelled for horses? Because it appears that MOST–DOCTORS IN THE U.S. WILL NOT PRESCRIBE IVERMECTIN (HUMAN FORM) FOR USE AGAINST COVID-19!

Why won’t the prescribe it? Look no further than the FDA’s statement against it!

This has created a major strain on those who WILL prescribe ivermectin and hydroxychloroquine–such as America’s Frontline Doctors. I have heard of people who ordered COVID drugs but who had to wait OVER A WEEK to get their medication in hand!

How may Americans have died because they could not get the drugs they needed in time?

I suspect we’ll never know. And with COVID-19, as experts like Dr. Zelenko have been saying (VIDEO) since the beginning, EARLY access to the right drugs is the key, and can be the difference between life and death!

The FDA knows that many people are taking too much ivermectin, many in the animal form I just discussed–largely because THE FDA is telling people NOT to take it; they won’t let doctors prescribe it or pharmacists to fill it. Therefore they’re PUSHING people to find their own alternatives, and once the People find those alternatives, the FDA tell them IT’S DANGEROUS TO TAKE IVERMECTIN IN THE ALTERNATIVE FORM!!!

It’s enough to drive the whole American population to drink–or in this case–drug!

The FDA’s article, “Why You Should Not Use Ivermectin to Treat or Prevent COVID-19,” includes this gem:

“For one thing, animal drugs are often highly concentrated because they are used for large animals like horses and cows, which can weigh a lot more than we do—a ton or more. Such high doses can be highly toxic in humans…”

So FDA–basically you want to stop or discourage the American People from using life-saving drugs like ivermectin–in ANY form they find them in!

If the inactive ingredients can be unsafe in these animal products, then it’s even more reason that doctors need to be allowed to prescribe the human form of ivermectin!

…”Meanwhile, effective ways to limit the spread of COVID-19 continue to be to wear your mask, stay at least 6 feet from others who don’t live with you, wash hands frequently, and avoid crowds.”

In other words, the same stuff we’ve been hearing for a year and a half. Nothing–by the way–about strengthening your immune system–the best way there is to remain healthy!

Last June, Hydroxychloroquine, also known as HCQ, received a similar fate to ivermectin at the hands of the FDA. Originally touted by President Trump as a possible “game changer,” –HCQ was ripped in the press–even though it too–like ivermectin–is considered highly effective.

The media pushed what turned out to be a bogus study which attempted to show that the drug not only didn’t work, but was dangerous. The Lancet had to take the highly unusual step of retracting the study!

That didn’t stop the FDA from revoking hydroxychloroquine’s Emergency Use Authorization later that month.

Joe Hoft at The Gateway Pundit asks if these treatments are being suppressed purposely because their success would mean that vaccines could LOSE government funding.

The article breaks down the history of how and why first hydroxychloroquine, and now ivermectin are being attacked by the FDA and their friends in the media. Much of it comes down to these vaccines’ use under the FDA’s “Emergency Use Authorization,” which has allowed the vaccines to be approved for use without FULL FDA approval.

In order to receive this authorization (EUA for short), there must be…

“…no adequate, approved, and available alternatives.”

And there it is! The vaccines are NOT eligible to receive the FDA’s Emergency Use Authorization if there is an adequate, approved, or available ALTERNATIVE! Like hydroxychloroquine or ivermectin!

Therefore, these highly effective, and don’t forget–CHEAP–alternatives DO EXIST in the form of hydroxychloroquine and ivermectin! But for the sake of HUGE profits, including the “booster” shots the Biden administration has been “pumping”; together with the lust of politicians to control the people; and possibly for even more sinister reasons, these life-saving drugs are being “killed.”

When I say, “possibly more sinister reasons…”, I’m not trying to stir up conspiracies, but I honestly would like an explanation as to why governments, media, and big tech are in a lock-step hurry to make sure that virtually every man, woman, and even child on earth are vaccinated--despite all of the deaths and injuries–and despite the very high survival rate for children.

It doesn’t add up, and millions can see it.

Just look at the mad rush to give Pfizer’s COVID vaccine FULL FDA approval today, knowing all we now know about these dangers.

Something sinister is going on. Those in charge are operating out of an anti-human agenda. Sorry, I can come to no other conclusion at this point. I wouldn’t say that the world has gone mad–more accurately–those who RUN the world are mad, and now that they see how close they are to asserting full control over us “little people,” it appears that their excitement has gotten the best of them.

Resident Biden is giddy with excitement that the FDA has handed him the tool to force Americans to “take the jab” or possibly LOSE THEIR JOB or even be denied access to basic necessities. He wasted no time today, urging private companies to implement vaccine requirements. This man is a ghoul–spending most of his energy attempting to shut down the American People!

Unfortunately, President Trump isn’t standing strong for the American People. He was booed at his rally in Alabama Saturday night for encouraging his supporters to take the vaccines.

More and more information will continue to come out as more people get vaccinated, and as more time elapses so we can see what happens to people vaccinated over time (VIDEO). I suspect, that based on what we have seen so far, we may awaken to something quite horrible.

Those who are in charge know this, and this is a key reason why they are in such a rush to do the deed. Because once much of the world is vaccinated, it will be too late to reverse the effect, won’t it?

The American People need to wake up–and fast–or it’s over for this Republic–and the world.

Patrick Rooney is the Founder of OldSchoolUs.com. He communicates clearly and fearlessly during perilous times about natural health, success, and freedom. To reach Patrick, email him at [email protected]. To Support the critical work of Old School, go HERE.