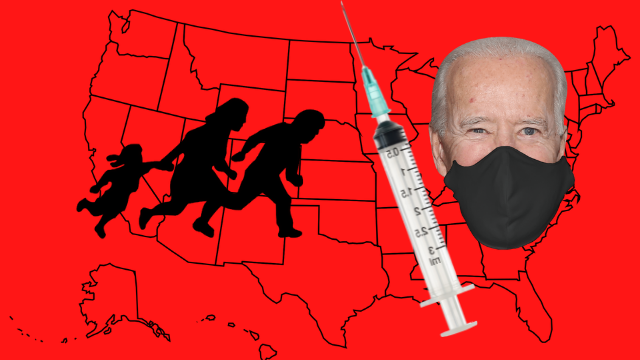 Does this make any sense?

Americans have been under mask mandates since last year, and now we’re under tremendous pressure to submit and take an experimental, non-fully FDA approved, potentially fatal, COVID vaccine.

The virus had been under control, continuing to diminish, until recently, when the “Delta variant” spiked up.

And during this same time, the Biden administration just so happened to have opened our borders wide. Hmmmmm…. Nothing to see here, right?

Is there a correlation? Don’t expect any government studies on this anytime soon.

While driving yesterday, I heard radio host Chris Plante discussing an incredible situation with a caller:

“Authorities in South Texas said Tuesday they’ve learned that illegal immigrants who have possibly tested positive for COVID-19 were being released from federal custody to a Catholic charity, which booked hotel rooms for them without notifying local officials.

The La Joya Police Department said a patrol officer was waved down Monday by someone concerned about a group that appeared to be sick at a Whataburger fast food restaurant. The officer found a family inside who were coughing and sneezing and not adhering to health guidelines, including the wearing of masks, authorities said during a news conference…”

Michelle Malkin wrote an extensive piece on this outrage.

Here’s another good article on the insanity of the situation.

Rep. Chip Roy of Texas had enough with Nancy Pelosi’s silly Congressional mask mandate while illegals continue to pour across the border, and went off! Good for him, but where are the others?

Did you really expect fairness from these people?

A middle finger for American citizens

The Biden administration is giving the American People a giant middle finger–treating the People like slaves, and treating ILLEGAL aliens as if they are the citizens!

How do you try to shut down your citizens with mandates that have nothing to do with science or health, while at the same time opening our borders to illegal aliens, then releasing them to Marxist “Catholic charities” groups, and putting them up in hotels at THE CITIZENS’ expense!!!

Is it possible to insult a People more than this?

I have to say that I blame the People for this. We know what evil people will do, but why are us citizens allowing this? And please, no excuses. It’s time to own up to our weaknesses and FIX them! Otherwise, we will no longer have a country.

What is the game here?

The overriding goal is the destruction of America as we know it. Just open the floodgates, and replace the American citizens–many of whom are patriotic, educated, and have some economic ability to fight the tyranny–with poor, uneducated people who have no clue as to the history and purpose of the United States.

They’re sending illegals into red states for two main reasons, as I (and others) see it: 1. Turn red states blue (simple enough). 2. Drive up the COVID infection rates in those states, thereby attempting to discredit principled leadership such as Gov. DeSantis of Florida, who embarrassed the COVID tyrants by successfully keeping his state safe and free while Democrat-controlled states locked their citizens down, with no greater success at controlling COVID.

It is a bit curious that the media highlights growing Delta Variant case numbers in red states, when we know the administration has been sending illegal aliens to those same states!

So the 64 million dollar question here, as the radio show caller I heard yesterday aptly said, is…

“How can the government expect COVID to go away when they are ACTIVELY SEEDING IT???“

This is diabolical. Period. How can any American do this in good conscience to another American?

And how can the People ALLOW it?

Biden’s obvious and spectacular failings are no doubt a grave national security concern. No argument here. Every day this continues, we become more and more ripe for a foreign enemy to attack us in one form or another.

As an example, this week, cybersecurity officials were silent when Sen Ted Cruz asked why the US has not sanctioned China after the Microsoft attack.

Our destructive policies are clearly not being directed by Biden himself, as most of us know. He was merely chosen as the somewhat traditional “face” his masters could show the People, while they quickly dismantle what is left of America.

Destruction is the final “solution” here. To make the U.S. another socialist hell hole like Cuba.

America is ripe for invasion in some form or another, and we have already been inundated with Chinese spies. Instead of cleaning up the problem…

If there’s anything the American People should learn from all of this, is that WE CANNOT COMPLY WITH EVIL! We cannot allow actions which destroy us!

My advice to every American who wants to see his or her country survive, is to first, get right with God and your family, and second, get involved! I know many are waking up, but it’s time to to stop the insanity, before the insanity stops US!