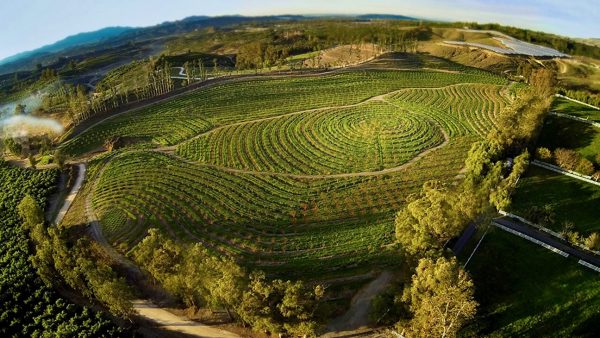 Have you ever thought about incorporating more real food into your life?

Or growing some of your own food?

Or even—gasp—LIVING in a more natural setting?

Well, John and Molly Chester, a successful documentary filmmaker and private chef respectively, have done this on a level that may just blow your mind.

After the nonstop barking of their family dog, Todd, got them booted out of their small Los Angeles apartment, they began to consider their options.

They ended up writing a business plan, which won them funding to purchase a 200-acre dried up piece of land in nearby Moorpark. Their intention was to create a farm that grew great-tasting and nutrient-dense food, while using natural practices that fostered a vast diversity of wildlife, sustainable agricultural practices, and humane treatment of animals. This may sound a bit touchy-feely, but in practice it really isn’t. It just makes sense.

The documentary movie, The Biggest Little Farm, tells the Chester’s story and that of their farm, Apricot Lane Farms.

The movie came out May 4th, but it is still in theaters, and if you have any interest in natural living, you need to run to the theater—it’s that inspiring.

The movie doesn’t delve into the professional backgrounds of John and Molly in much detail, but I looked elsewhere and read that both were highly accomplished in their fields. John was an Emmy Award-winning director, and it shows in the movie’s beautiful cinematography. He also spent time managing his family’s farm while growing up, which explains his farming and animal skills.

And Molly was a traditional foods private chef with many celebrity clients, per her bio.

My point is that John and Molly pulled off an incredible transformation of their large farm, but not without first developing professional competence in related fields, raising a lot of outside money, and hiring a large team of workers and bringing in hefty equipment.

I’m saying this to drive home the point that we need to start at whatever level it is that we are at, and build from there into success.

For some that might mean starting to sprout grains, beans, nuts and seeds in an apartment—I have.

Another avenue for city dwellers is to look into working your own little plot of land in a community garden—we did that. Here’s a link to the American Community Gardening Association. Hold onto the link, though their mapping system is currently down while undergoing enhancements, per their website.

If you rent or own your own home, you can likely start your own garden. We did that too.

Or of course, you may want to move at some point to somewhere more rural where living and eating closer to the land can be accomplished on a larger scale. This is what we’ve done, though as the Carpenters once sang, “We’ve only just begun.”

There’s so much I could say about The Biggest Little Farm movie. It was so inspirational to me on a number of levels. But I want you to see it yourself.

There are lessons about life that apply to anyone—not just farmers—the biggest lesson for me is the way that John was eventually forced to find that he could not rely on a guru to supply the answers to overcoming obstacles—these answers needed to come from him standing back and simply observing.

This is the realization we all must come to, whatever our station in life. Because it is life’s greatest lesson.

Patrick Rooney is the Founder of OldSchoolUs.com, a website that believes “If it ain’t broke, don’t fix it.” Its focus is Health, Success, and Freedom—yeah, in that order. Patrick is the author of GREEK PHYSIQUE: The Simple, Satisfying Way to Sculpt Your Body—Even if You’re Old, Weak, or Broken Down; and is also the creator of Greek Yoga™ and the Greek Yoga for Beginners video. To reach Patrick, email him at [email protected].